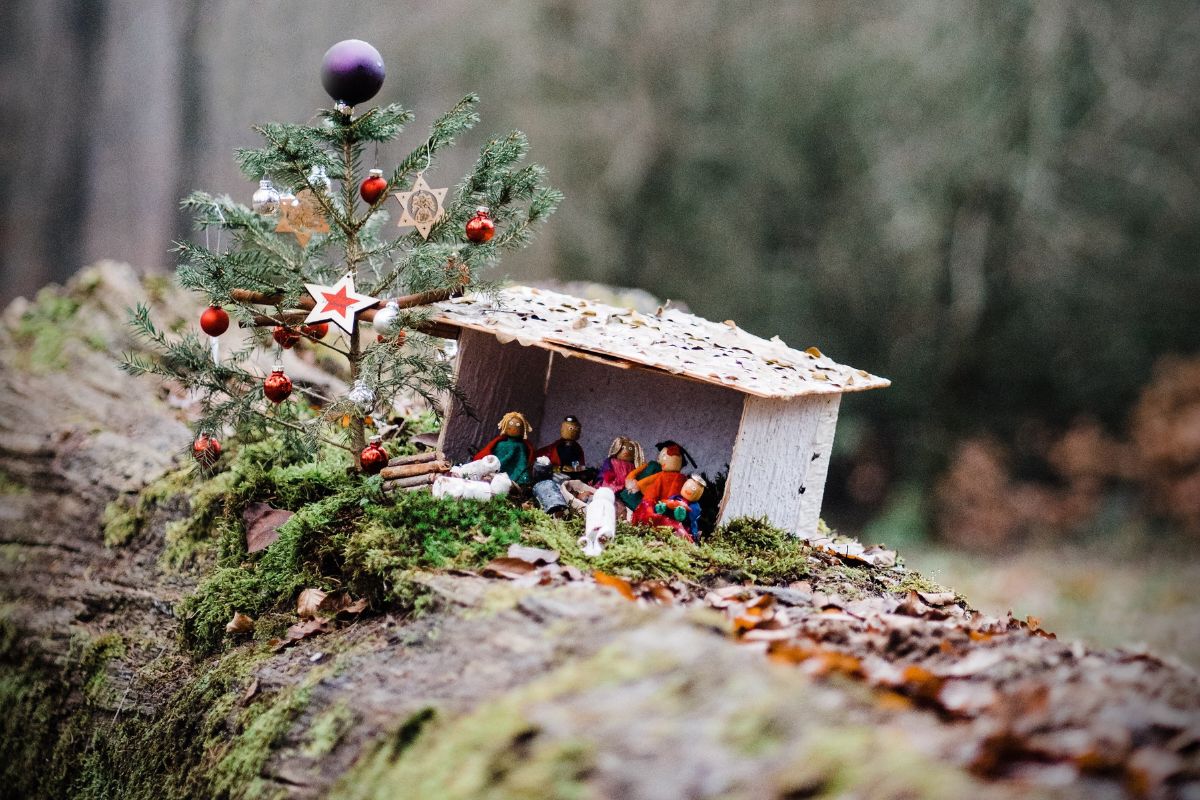 A Living Nativity in Each Heart

This morning, my “early to bed, early to rise” son was feeling a little less than gung-ho for Monday morning to arrive.

He padded softly to my room and asked if he could get in bed with me.

“Absolutely!” Was my ready answer, for this infrequent, yet welcome, occurrence. I asked Alexa to play Carol of the Bells and we both laid there and listened to Christmas music after snoozing my alarm no less than five times.

As I laid there and listened to some of my favorite Christmas tunes, I was whisked back to my childhood church, Countryside Christian Church in Monett, Missouri.

The little country church sat high upon a hill and was the perfect location for the living nativity we displayed every year around this magical time.

The church basement was outfitted with costumes. There were robes and wooden staffs for the shepherds, ornamental decor and gift boxes for the wise men, a frock for Mary, a shepherd-like outfit for Joseph, and several white baptismal robes and halos for the angels.

The church also borrowed livestock from area farmers and those in our congregation. There was a donkey (which got a little carried away with one of our elderly actors one year). There was also a camel and sheep ‘lowing’ in the barnyard nativity located right on our hilly church lawn.

The most coveted role was that of “top angel.”

This angel was basically the head angel and had to climb the ladder behind the stable to the top of the barn.

There was a wooden perch propped near the edge and the top angel would stand high above the barn with her (or his) hands held high, in praise of the birth of the baby king lying in the manger just below.

It was more often than not cold, windy, and our arms would practically fall off from holding them up for so long. Yet, it was the role all the little girls in my age group wished desperately to play.

Followed closely by Mary, who held a small baby-doll to resemble the baby Jesus, which was hurriedly plucked from the church nursery mere minutes before showtime.

Since our church sat high upon a hill, it was the perfect place for area residents to park their cars below and watch the live depiction of the birth of Jesus each year.

There was a lot of planning, building, sound system maintenance, feeding animals, laundering costumes, providing food and coffee for the cold actors, etc. that went into this production every year.

Yet, the ministry it provided was well worth the effort. And, of course, the kids involved in the nativity scene felt like stars on Broadway with each new performance.

As I was reminiscing about the living nativity my church was well known for, it occurred to me how many differing roles there were to play.

And I thought back to the roles I joyfully played (most of them, if you consider how many years we did this). Some were more coveted than others. True to real life.

I asked my son this morning, which role he would have played. He automatically said, “Probably a wise man.” Then went on to another topic, without explaining why.

It got me to thinking, which character would I most identify with today? Or, is there a little of each nativity power player residing deep down in each of us?

Would I play a shepherd, out late at night, watching over my myriad of sheep? Likely falling asleep now and then, until awakened by a bright light in the sky, an angel telling me of the birth of Jesus.

Once the initial fear had subsided, out of sheer curiosity, choosing to travel and see this miracle I couldn’t quite believe, without seeing it for myself.

Or, would I be a wise man? A bit haughty, yet wanting to do my part to pay homage to the foretold child born to save the world.

Bringing ornate and richly scented gifts to the parents of the baby king in order to show respect and possibly gain some insight into this rather extraordinary way of claiming kingship.

I may just jump at the chance to be Joseph, though I feel that his role in this story would have been a difficult one.

First, pledging to marry Mary. Then, finding out she is pregnant. Deciding to divorce her quietly, though they were not yet married, just engaged.

Then, being told, in a dream-like vision, that: “All is well, your soon-to-be has not been unfaithful. She is carrying the Savior of Man, conceived by the Holy Spirit. And you get to be his earthly father. Joseph, you are going to play a pivotal role.”

And play that role he did, indeed.

Mary? I often wanted to play the part of Mary in my church’s living nativity.

Young, beautiful, demure, holding the tiny Christ-child in her loving motherly arms. She must have experienced so many waffling emotions during the time of her pregnancy, after the birth of Jesus, and throughout his life as a young man.

Mary holds very special meaning, and for good reason. She is the proof the world needs to show that God can take an ordinary, nothing-special, everyday person and create in them a vessel in which to house the greatest miracle the world will ever know.

Our Father specializes in choosing the “ordinary” to fulfill the “extraordinary.”

Yes, Mary was chosen. We all wish to be chosen.

As a mother of sons, I can relate to the maternal feelings Mary must have felt for her beloved Jesus.

To be a young Mary, holding that precious babe that would one day save the world is one thing.

But, could I bear to be the Mary that watched her precious son die a cruel and torturous death on a cross, not fully knowing that He would soon rise again?

That version of Mary doesn’t sound as appealing, does it? Yet, she played the role, and we salute her for doing so beautifully, faithfully, and devotedly.

The beauty of Jesus’ birth is that there are so many roles involved.

From the shepherds who saw the Christ-child firsthand and couldn’t wait to share the good news, to the wise men who came bearing gifts and walked away knowing they had witnessed a spectacular sight, to Mary and Joseph, looking down at their perfect newborn baby, lying in a manger, innocent of all sin from that first day of birth until the day, 33 years later, that he hung upon a tree to forgive the collective sins of all mankind.

Each role was chosen, precious, necessary, and it wouldn’t be the traditional story we re-tell year after year without each of those roles successfully filled.

More importantly, which role would God choose for you?

Which role is He choosing for you now?

Setting Intentions for the New Year

Support Christian Owned Businesses When You Shop This Holiday Season