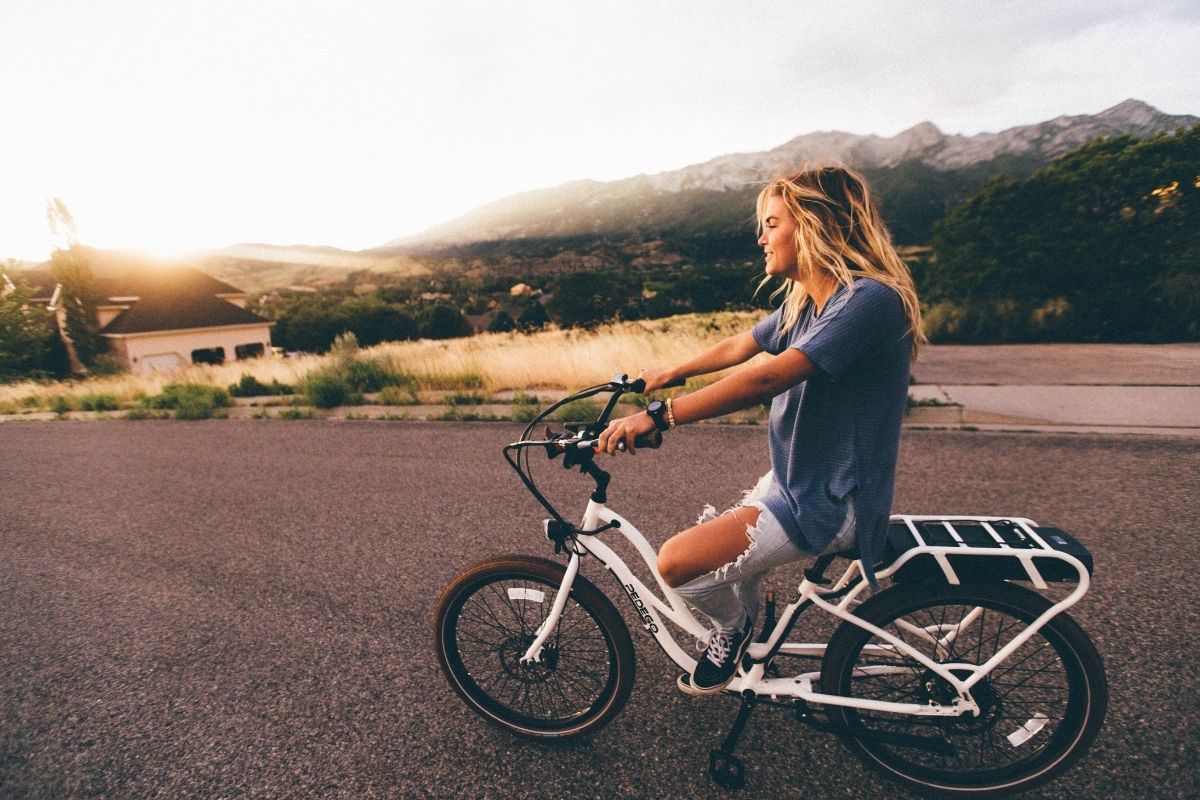 Keep Your Eyes on the Goal

Earlier this summer, my fiancé and two sons took a bike ride on one of our favorite local trails. We came to a gravel path which veered from the asphalt trail. Out of curiosity, we wanted to see what was at the end of this seemingly hidden, but mysterious path. We neared the end of the trail, closed by a gate directly in front of us; the other two directions were made up of an old railroad, obviously no longer in use. To the right, a tree had fallen over, blocking the path completely. To the left, the path was clear and led to two old-fashioned metal bridges covering the flowing river underneath. We left our bikes at the edge of the railroad to do a bit of exploring.

With three guys and one gal, I do not have to tell you who was the least adventurous of our group. Yet, anywhere my boys go, I go. I was wary of them walking along the old, splintered railway ties, but short of tripping and falling (which often happens on flat surfaces), I did not see much danger on the tracks.

However, once we reached the first bridge, the railroad was obviously tattered from years of use. There were missing ties, providing a gaping hole to the flowing river below. Of course, my boys wanted to go as far as humanly possible. I begged them to turn back, but they would not hear of it. My fiancé took them each by the hand and safely led them across the old bridge, carefully pointing out each step to be sure the railway ties were secure.

Shaking out of fear, I could not stand there and watch my boys venture head first into adventure  without being part of it. Thus, my fiancé headed back my direction and as he protectively did with my sons, he took me by the hand, told me where to step, and encouraged me not to look down, but instead focus straight ahead toward our goal, the second trussed bridge mere yards in front of us.

Upon reaching the second bridge, I felt grateful for the journey. The view was fantastic. The water below was a captivating emerald color. There was an old flat-bottom aluminum boat meandering down the river, its inhabitants lazily fishing the afternoon away. The river’s edge was overgrown with wildflowers, exotic grasses, and we could see the occasional bubble betraying the hidden fish just below the water’s surface.

It was a glorious sight. One I nearly allowed my fear to steal from my treasure trove of special memories.

How often does this very same thing happen in life? How many times do I look directly at the ground, carefully measuring the difficulty of each step, trying with all my might to control the minute, sometimes insignificant, details of every situation, rather than seeking the larger perspective of a goal in the distance and faithfully allowing things to unfold as my Heavenly Father has already determined?

God’s very son, Jesus, is faithfully waiting for me to take his hand and lead me across the broken ties, disrupted gravel, and uneven surface threatening to interfere with my life’s journey. He is faithful to direct my steps and keep me from plummeting to a disparaging fate far below the solid ground on which I stand.

Psalm 37:23-24 says: “The Lord directs the steps of the godly. He delights in every detail of their lives. Though they stumble, they will never fall, for the Lord holds them by the hand.”

“We can make our plans, but the Lord determines our steps.”

I think back to all the times in life that I allowed myself to be distracted by the metaphorically uneven surface beneath my feet. My paternal grandparents died within two years of each other when I was a child. I suffered for years with anxiety at being separated from my parents. I was the kid whose parents got called at 3:00 a.m. to pick me up from a sleepover. While it embarrassed me greatly, I could not compete with the terrifying grip of fear that something would happen to my parents, in the same way I had lost my grandparents.

Years later, I struggled through a devastating divorce from someone I believed would stand by the commitment we made in front of family, friends, and our Lord, to love each other till death do us part. My naivety toward Christian marriage was sadly proven wrong when my then-husband made the choice for both of us to separate. Again, the paralyzing fear, loss, betrayal, and pain imprisoned me in abysmal darkness I had never experienced.

For the first time in my young life, I found myself on my knees, praying to my Heavenly Father.

Much like Jesus in the Garden of Gethsemane, for the cup (in my case, of divorce), to be taken from me. While God did not magically heal my marriage, He did faithfully care for His child.

He provided that mystical peace which surpasses all understanding that I read about in Philippians 4:7, “And the peace of God, which surpasses all understanding, will guard your hearts and your minds in Christ Jesus”, throughout the whole painful process. He comforted and loved me back to emotional health, providing friends and family that assisted in the difficult journey of starting over.

As I stood on that old bridge, that could tell so many stories of hardship, travel, adverse weather, and a myriad of other challenges it has seen since its birth hundreds of years ago, I considered the seasons of hardship in my own life. The broken railway ties representing my once broken heart. The nails jutting up through the wooden surface, illustrating the triggers of fear, betrayal, mistrust, and abandonment in which I still struggle. The missing railroad planks, similar to pieces of my own wounded pride, anger and resentment, leaving me open to dangerous worldly influences in an attempt to fill the open space.

Then, I looked beside me. I saw my fiancé, ready and waiting to lead me back to the safe surface, after providing what will stand out in my mind as one of the most beautiful experiences of my life, with my precious children. What a timely visual representation of the love Jesus has for his followers. He wants to lead us through the rocky terrain, toward a safe haven of tranquil peace, comfort and grace. He will not let us fall, if we put our full faith in his protective arms.

Embrace the safety of Jesus, stop focusing your energy on each solitary step. Release your worries and fears to His listening ears and watch Him faithfully show you the beautiful landscape of life, waiting just beyond the rocky path.

Listening for God’s Voice Instead of the World’s

Devotional: Adopting a Spirit of Power